…and why romantic partners often fight over finances 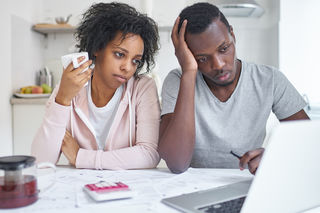 Money is a complicated topic. Most of us tend to feel uncomfortable talking about it, and might even prefer to reveal aspects of our sex lives than to divulge our income.

Even if we spend countless hours thinking of ways to make more money, we may not give much thought to how we relate to money. But when you pay attention to your relationship with money, you can gain some important insights into yourself.

Do you feel like there’s never enough money, and always too many expenses? Does it pain you to spend money? You may have a scarcity mindset, as described by Steven Covey in his bestselling book The Seven Habits of Highly Effective People. With this mindset, you see money and other resources as zero-sum games—with more for others meaning less for you and vice versa.

With a scarcity mindset, you might feel bad whether the money is coming in or going out. Paying money to others feels bad because you see it as less money for you, and receiving money can lead to guilt about “taking money from others.”

I noticed my scarcity mindset a few years ago when my income temporarily went up. I was looking forward to putting the extra money toward savings and doing something fun with our family—and then we had a whopping Emergency Room bill and a flood in our basement. I felt bitter disappointment that all of the money went toward covering these bills.

“We’re so afraid if we give something, we lose something,” said “Zen Millionaire” Ken Honda, author of Happy Money, whom I recently interviewed on the Think Act Be podcast. But in reality, spending and receiving money are part of a cycle. “If you spend $100, it goes into somebody’s hand, who will spend the $100 somewhere else, and in the end that $100 comes back to you,” he said. “That’s how the economy goes.”

“If you find yourself out of the cycle,” he continued, “that means you’re not living. Life is found in this cycle.” Embracing that cycle of giving and receiving is the abundance mentality.

In my own example, I caught my thinking and was able to shift my perspective. Rather than feeling cheated out of money that I thought I would have, I realized I had been given exactly as much money as I needed to pay for unexpected bills. It was all part of a well-functioning system.

Honda described what he calls “money wounds” that we carry from earlier in life. “Most of us are hurt around money when we were children,” he said. “Maybe we were denied taking ballet or soccer lessons because our parents couldn’t afford it. It was something they couldn’t help, but we still felt hurt that we were denied certain things.”

Nearly all of us experienced these kinds of disappointments, since parents have real financial limitations. And without realizing it, those early experience “can haunt you 20 years later,” said Honda. For example, maybe your parents couldn’t afford the fashions that the other kids were wearing, so you developed a feeling of inadequacy.

You might also have internalized the stress your parents felt about money, or maybe you blamed yourself for their stress. Honda recommends that people revisit their early financial experiences to discover possible money wounds that continue to affect them.

Our early experiences with money can also affect what we believe we’re capable of. For example, if we dreamed of getting a nice toy but couldn’t afford it, we might come to believe that the things we really want in life will always be out of reach.

“Those experiences can limit us and define who are,” said Honda. “Since we were denied our dreams, we feel like our dreams are not something we can fulfill.” As a result, we give up on the dreams we used to have—even if we’re perfectly capable of reaching them.

This process is very similar to Dr. Martin Seligman’s concept of learned helplessness. Animals that receive inescapable shocks eventually won’t try to escape them, even when the conditions have changed such that they could if they tried.

If you find that you’re constantly doubting whether you have what it takes to reach your biggest goals, consider the possible origins of that expectation.

Money is tied to basic survival for most of us. As Honda pointed out, unless you subsist off the land, you’re dependent on money to provide the fundamentals like food and shelter. Thus we often attach fear to money.

“I ask my clients to write down their worst-case scenario,” said Honda, “and usually it’s some version of ‘life without any money.’ So they won’t be able to pay the rent or the mortgage, they lose their house, they can’t pay for their kids’ tuition, and so forth.”

Beyond the fear of going broke lies a deeper concern; what you imagine can reveal what you’re afraid of. Does running out of money mean going hungry? Feeling embarrassed? Being a disappointment? Looking irresponsible? As you examine the root of your money-related fears, you can discover insecurities that underlie them.

Finally, your relationship with money can show what you think of yourself. If you’re confident about financial matters and willing to take a risk, you likely see yourself as competent and adequate to meet life’s challenges.

On the other hand, if you’re often afraid of running out of money and failing in your financial ventures, you might harbor the belief that “I am not enough.” It goes deeper than money—it’s about your own internal resources and ability to manage what comes your way.

Start to notice the messages your mind is feeding you about money. What do they reveal about how you see yourself and your abilities?

Why Couples Argue About Money

Given the complexities around money, it’s no wonder that it’s one of the main sources of couple conflict—especially when our underlying fears about money are at odds.

For example, you might fear running out of money and so are driven to save as much as possible. Your partner, on the other hand, might be afraid of looking unsuccessful, so wants to spend a lot of money to keep up appearances for others.

As Honda noted, it’s often no accident that people with opposing views of money end up together. “For a saver, a spender looks so attractive,” he said, “because they know how to enjoy life. And a spender is attracted to a saver because they offer security.” And while these aspects may have drawn the couple together, after a while, the same tendencies can become sources of irritation.

Once you and your partner identify the underlying dynamics, you’re in a better position to work through the real issues together rather than continuing to repeat the same surface-level argument.